Confessions of a sculptor who is called to paint canvass.

Much as my sculpture calls to me in an intuitive and demanding way, I was called to paint canvass this summer.  Sure I’ve painted before, had instruction, but what was in me didn’t need crafting images, it needed soul expression………..colors, flows, cosmic images of depth and density far from my own personal understanding.  So here follows the wild ride of my first large painting, a 60″ x 48″.

So the above painting was just not doing it for me, but I did not know why.  So I left for a month’s  travel.  We went to South Carolina to experience my first total eclipse of the sun.  Many pictures were taken, but the enormity of the spiritual experience will hopefully be told in the second canvass.  I know technically what I saw and what I want to put on the canvass, but apparently I don’t have the final say on what’s produced there.  This process is just like my sculpting process.  I am led.  I am in a circle of beings and energies wanting expression.  We paint and sculpt by committee.

After camping in South Carolina,  we were home a few days and then flew to California to see our grandson, and his parents.  While we were home, I asked the committee what the painting was missing, because it was NOT hitting the mark.  So I meditated in the studio, staring at the painting.

What happened next was pure gift.  As I stared at the painting a white crystalline light emerged from the center of the sphere, right out of the Vessica Pisces.  It beamed into four light streams as you see below.  More light poured out and clouded the whole of the canvass, as is better represented in the last stage.  I thought wow, am I really seeing this.  So I looked around the studio and all was normal and without this crystalline light.  When I looked back the canvass was normal, and then it repeated what had happened before, crystalline light poured from the center and clouded the whole of the canvass.  It did it three more times.

When something like this happens, I feel blessed to have received the answer, and in the same moment, it does not feel extraordinary.  It feels right and true.  I asked and I received my answer. 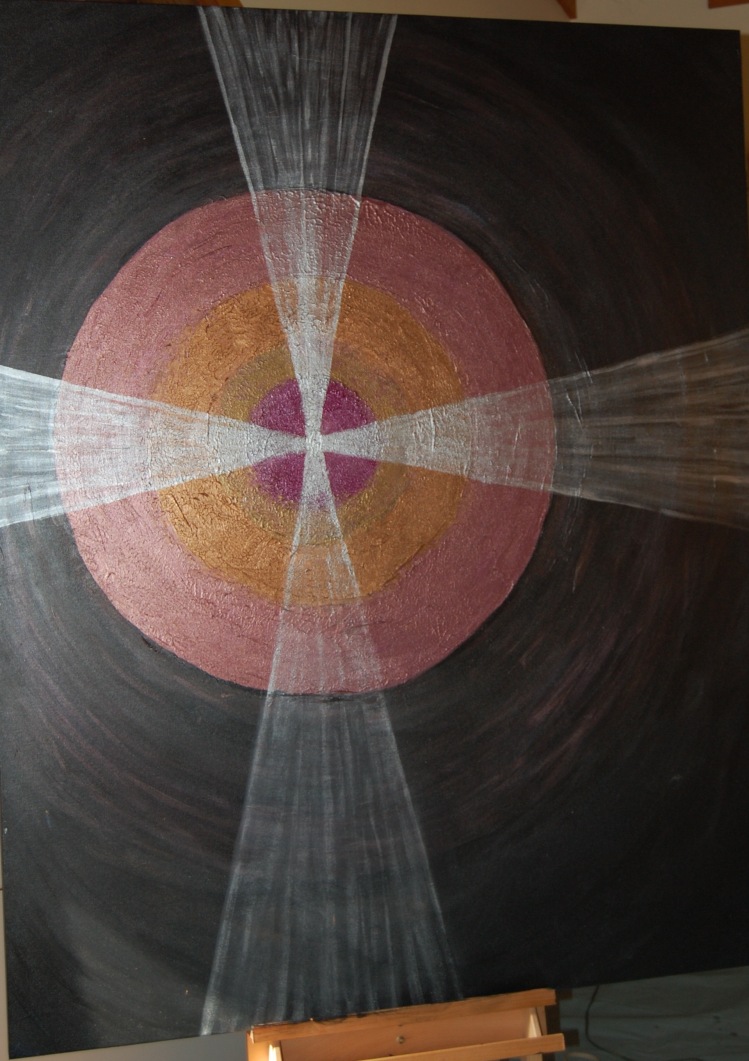 the 7th stage: taking it back to be surrounded by the cosmos, the Vessica Pisces in the center emitting crystal light, but we are not quite there.  In fact, I really didn’t like it at the end of the day.  But I followed guidance and let it be.  The next day another layer was added.